Will Grigson Rensselaer, IN, US

I was 14 years old when I first heard this album. Nowadays, I still love it with all my heart. Mellon Collie is my favorite album of all time, and it’s really taught me to open my mind up to different sounds.

Every dog has its day.

Every grunge album that’s good has everything to do with a dog. Alice in Chains Dirt and the dog on self titled are big super unknowns that I wrote for the music industry as a kid. Mellon Collie is about a dog. Amazing how much time has gone by like we dodged a bullet with butterfly wings. Peace. I hope we are making it to Heaven safely during the pandemic. The world is a vampire set to drain, secret destroyer, lifts us up to the flames. Perfect song for todays situations. I don’t mean that we are God’s, we’re just happy to have a belief in those around us. I hope the Church a great holidays and keep your faith blessed among us as we sing rock n roll through the times we have left. Have a good rest The Smashing Pumpkins Linkin Park Soundgarden Alice in Chains Nirvana and way more bands than we can count. Goodbye Goodbye Goodbye. See you up the road. TP. 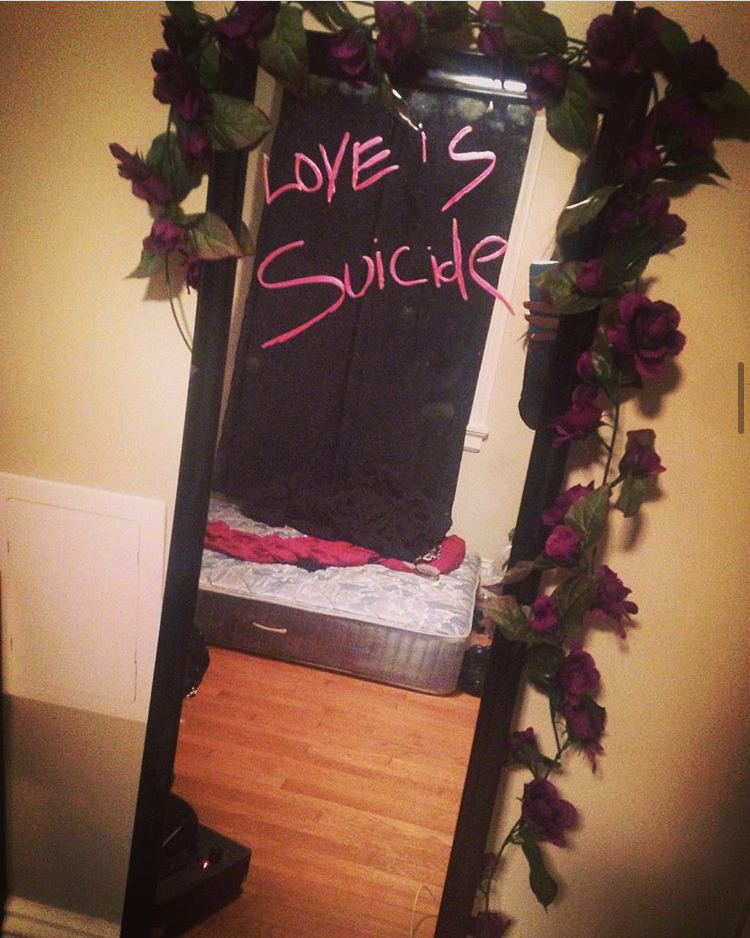 October 2016… Four years ago A few months after an ex of mine broke up with me for someone else I was in my room crying and upset that I couldn’t find another boyfriend.  At the time I felt alone and I was also at a very low point in my life. I was depressed, hated my job and most of my coworkers cuz they bullied me, had no real friends around me just drinking buddies, drinking heavily to try to escape my misery…. one night I got really drunk  while listening to Mellon Collie on vinyl and just decided to take my Russian red Mac lipstick and write “love is suicide” on the mirror…….

I kept that on my mirror until I met my current boyfriend two months later who I am still with till this day. I no longer think love is suicide and relate more with “stand inside your love” these days 🙂

Yeah I know this isn’t a typical “this album saved my life”’post but I thought I would share it anyways with a picture from that night.

One of the most exciting nights of my youth. Not only was a new SP album coming out but a double album. Me and my friends drove to the Tower Records in Carle Place and literally camped out at Midnight to get in line just to have something we knew would be special. Was such an amazing feeling to hold something in your hand with anticipation of what it would sound like. And from track 1 on it was pure magic. So many memories were built around it. And still are to this day.

Tale of a hillbilly fan.

I was around 12, a kid living in the Appalachian mountains of Eastern Kentucky. My father had just been diagnosed with a rare form of cancer, and we were very much poor. It was an exceedingly depressing time in my life, and I remember seeing “Bullet with Butterfly Wings” on TV. I didn’t really listen to music at all during that time in my life, as all that you would hear around these parts is country music. So SP introduced me to a music I actually liked. I remember seeing the double disc in Walmart, and sweating bullets on whether I should spend the hard saved money I had from my birthday on it. It was one of the first major purchases I’ve made in my life, as at the time, that was a fair bit of money for me. I purchased Melon Collie, and listened to it almost daily. It brought me through the passing of my father, and the whirlwind of horrible things that happened thereafter. To this day, I still listen to the album. It’s timeless, and many of the memories I associate with it, both good and bad, are still there. It was a soundtrack for a tough time in my life, but one I will forever cherish.

The day I met SP and MCIS

I was a late starter in music terms and only heard ‘Tonight, Tonight’ when i was a roadie for a mate’s cover band. He lent me MCIS and that was it. i collected and have loved all the work and it just never gets old. I love ‘Disarm’ and ‘Bullet’ and the latest album shows the edge has not been lost. I have watched Billy on the Tiny Desk session. Fucking awesome. Long live the Smashing Pumpkins – my child has been enlightened and my only regret is that I didn’t meet SP earlier in my life. 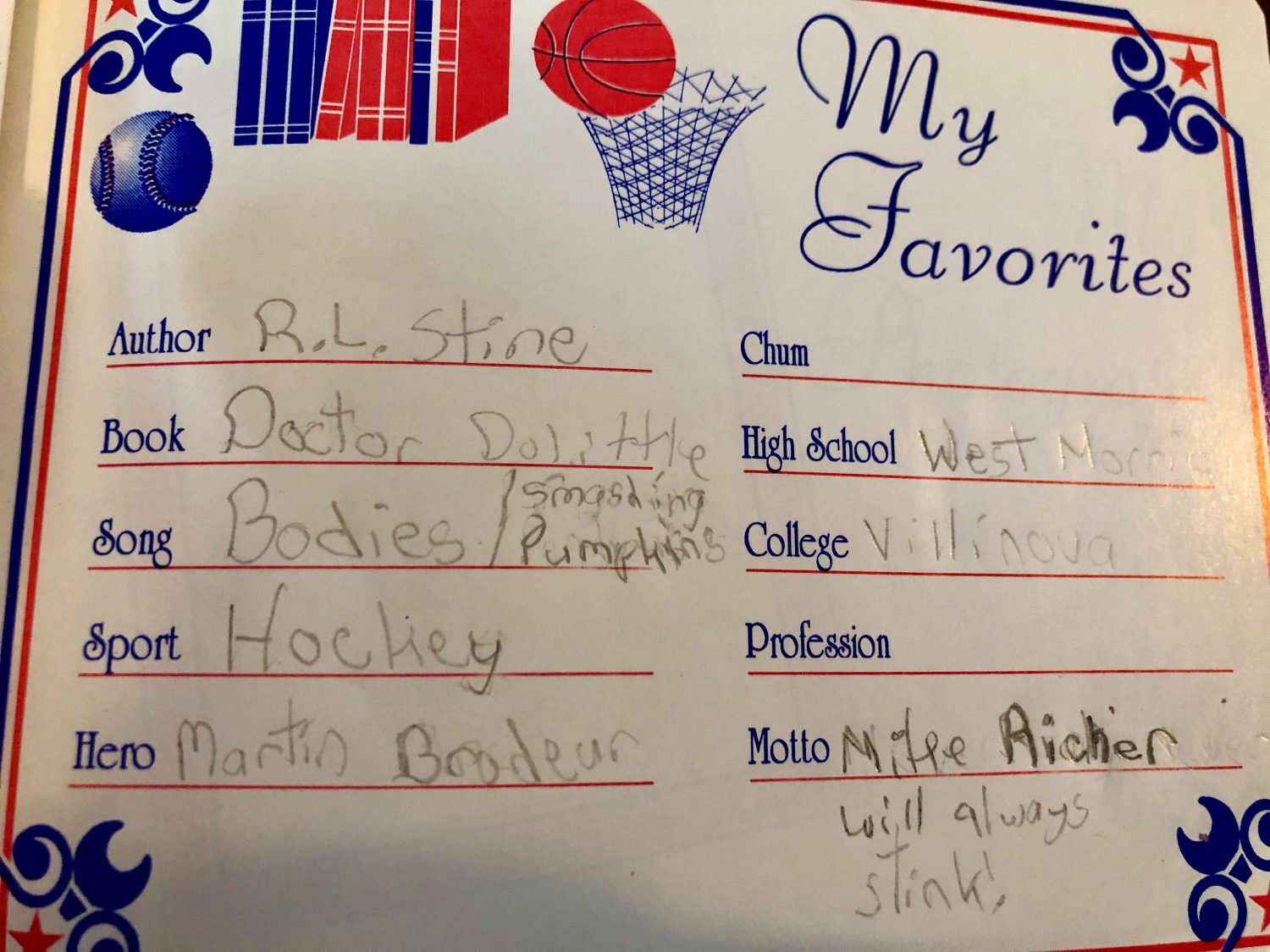 Here’s an excerpt from my 4th grade (!) autograph book, where I scrawled in “Bodies” as my favorite song of the year. No doubt the influence of my older brother, who was (and remains) a diehard Pumpkins fan. Little did I know what a monumental impact MCIS would have on my life and trajectory into music.

Mellon collie and the infinite mourning

I discovered this album in a charity shop where my aunt lives. Got it for €1. Quite a steal to be honest. At the time, it was just the day after my grandmother’s funeral which was the first time I have experienced mourning a loss. I felt odd and cold. When I bought it, I played it the minute I got home. I fell in love. Some of the most beautiful and well crafted songs I had ever heard. This album really helped me cope with the loss of a loved one. I’m not a seasoned veteran like some of the other Mellon collie fans but it really showed me that the world was still here for me. Thank you, mellon collie!!

Music to call my own

I was a homeschooled kid and when I turned 16 I started going to a local community college and my mom gave me a few bucks for lunch and I saved it to buy Mellon Collie and the infinite sadness. I had head a few songs on the radio and had fell in love with it. I remember buying it at a Fred Myers store and as I unwrapped the CDs the smell was perfect. To this day I still sometimes open the case just to smell the booklet again. Thank you

I have loved MCIS since I was a teenager. That album played the soundtrack of all of my teen years. I never got to see SP in concert and then as an adult they can to Arkansas and I cried hearing every song from MCIS that I never thought I would get to hear live. I felt whole, happy, and complete for the first time in so long. 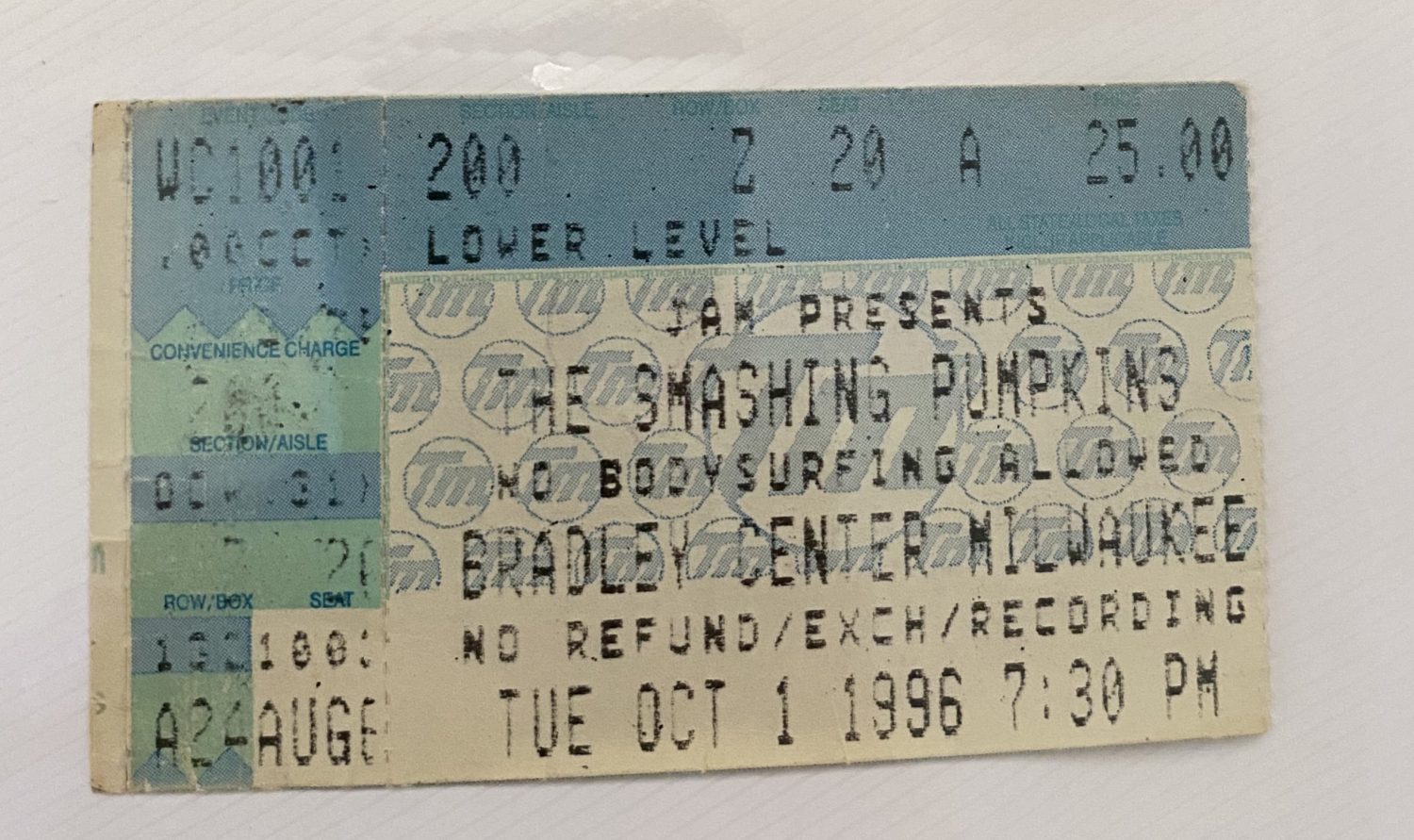 My very first concert was on the MCIS tour. I had just turned 16. That night changed my life forever. Thanks and much love SP! 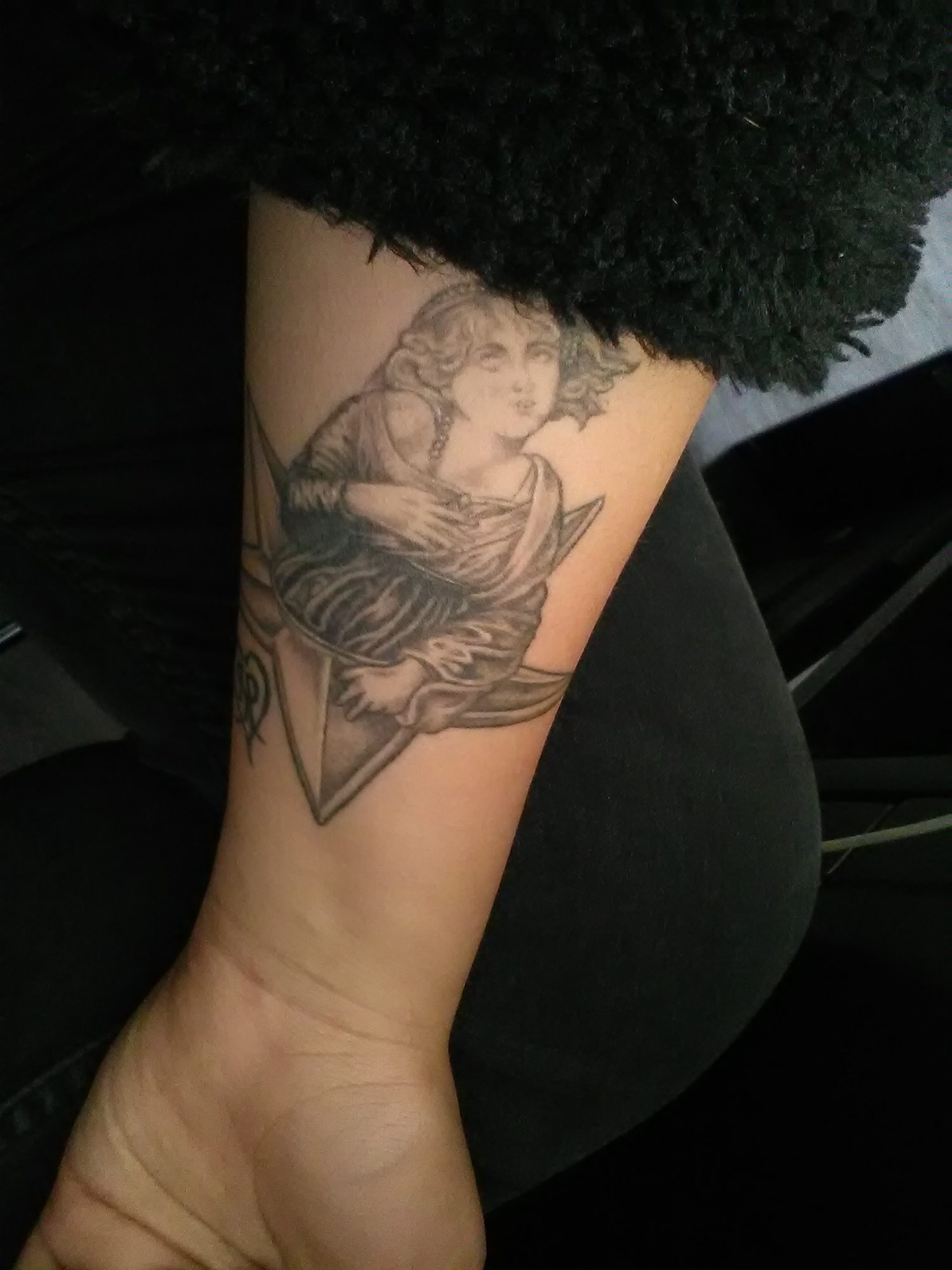 Mellon collie and the ecology class

First off, I owe it to my dad for getting me into SP. He has been a big fan since the 90s and telling me, listen to them! You’ll love it! So, my junior year of high school, I pulled up 1979, watched the video and fell in love with my all time favorite band!

Mid to Late
90’s – I wasn’t an MTV Head growing up, but one day I came across the channel
and a music video unlike any other presented itself.  It was ‘Tonight
Tonight’.  The singer’s voice was . . . different.  And I don’t mean
in a bad way.  The sounds of the music felt oddly dreamy: rock music with a
strings section and marching-style drumming that motored the song’s
engine.  I LOVED IT.  And I wanted more.

I told my
cousin, who was a Pumpkins fan and had the CD album, and asked him to record it
onto a tape for me.  He did and I WORE THAT TAPE OUT.  The Smashing
Pumpkins had become one of my favorite bands.

Soon after, I spent
my own money and BOUGHT Mellon Collie (this was a big deal; not yet a teen and
here is my first major music purchase).  I
then collected Siamese Dream, Gish, and Pisces Iscariot.

In becoming a
guitarist, Smashing Pumpkins’ music became even MORE crucial as it was through
learning their songs on guitar that I really began to understand how music
worked.  I suppose they call that music
theory.  At various times throughout life,
I’ve learned to play every song from Mellon
Collie.

In 2014, I
performed a cover of ‘By Starlight’ at a friend’s wedding reception.  I then recorded the cover song for said
friend – https://zevin.bandcamp.com/track/by-starlight-the-smashing-pumpkins-cover

To this day, I’ve
never stopped being a fan of The Smashing Pumpkins and Mellon Collie and The Infinite Sadness remains one of my Top Five favorite
albums of all-time album in my vast collection of music.